SO, I'll definitely be hard to please for this one-----maybe not! 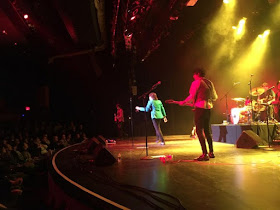 Golden Nugget always does things right! Choosing Tributes to the legends with the countless hits and Satisfaction' The International Rolling Stones Show was no exception.

The songs: A great concentration of Rolling Stones hits from the Mid 1960's through 1981 powered out from the Showroom stage at The Golden Nugget, Atlantic City! A packed auditorium were rockin' with delight to the opening number Street Fighting Man from the Infamous 1968 release Beggars Banquet. Nineteenth Nervous Breakdown, Let's Spend The Night Together, all early staples of The Rolling Stones, were received to loud approval. The band wove their way into the 1970's, unzipping that famous Andy Warhol album jacket of Sticky Fingers with the rambunctious Bitch, then tearing into It's Only Rock N Roll (But I like It) from the 1974 album of the same name! OH! But wait! Can't You Hear Me Knockin' from Sticky Fingers drove this Stones freak crazy! Fantastic Mick-like prowess on lead vocals and some serious soul jammin' from the boys during the middle solo. Sympathy For The Devil featured the trademark Red devil jacket costume change for the Mick lead, Chris LeGrand, who took his "struts" seriously, again, to the delight of all us Stones fans. Other tried and true classics like Jumpin'Jack Flash, Honky Tonk Women, Start Me Up, Brown Sugar and I Can't Get No..(Satisfaction) were stellar, high powered efforts from these talented players. Mission accomplished on kicking off the final weekend of 2016. Kicking off any weekend would be a good call with Satisfaction/ The International Rolling Stones Show!   A++